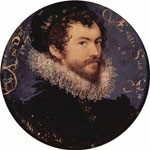 Nicholas Hilliard was born in Exeter in 1547 and was the first notable English born painter of portrait miniatures. Following his father’s profession, he trained as a goldsmith and began painting miniatures at a very early age, being influenced by the Flemish illuminators and the engraver Dürer.

By the 1560’s he was the official Portrait Painter and Limner to the Court of Queen Elizabeth 1. Painting in watercolour on vellum, Hilliard’s exquisite portraits of the Queen and members of the Court were often set in beautifully jewelled gold frames. The paintings were highly prized by the Queen. She gave likenesses of herself to those in high esteem and kept a collection of treasured portraits of her ‘favourites‘.

Around 1600 Nicholas Hilliard wrote A Treatise Concerning the Art of Limning, a work of great importance as a history of miniature painting. He died in January 1619 and is buried in St Martins in the Fields, Westminster.

Some fine examples of his work are to be found at the Victoria and Albert Museum, London, and in other notable collections.

When they founded the Society in 1982, Roz Pierson and Sue Burton chose name it after Nicholas Hilliard, one of the most famous miniaturists of his time, who also came from the south west where the Society is based.