Christina Hopkinson is an award winning watercolour artist living on the Staﬀordshire/Shropshire border.

Christina has worked in many mediums over the years, but since 2011 has concentrated solely on watercolour: a medium which comes alive on the surface of the paper; a medium which cannot be totally controlled, and one which tests the artist constantly as the pigment makes its own way through the water.

Over the course of the past twenty years, Christina has exhibited regularly, both as a solo artist and as a member of art societies.

Birds have played a large part in Christina’s work for the past four and a half years, with the artist initially concentrating on portraying the birds around the garden feeder. However, it was a painting of two Nandays Parakeets in a lemon tree in the garden of a house in Florida, which won the World Wildlife Prize at the Association Of Animal Artists 2017 exhibition, that kindled a love of painting the wild birds of Myakka River State Park in Florida. In 2018, Christina was awarded the ‘Association Of Animal Artists Inaugural Chairman’s Award’. 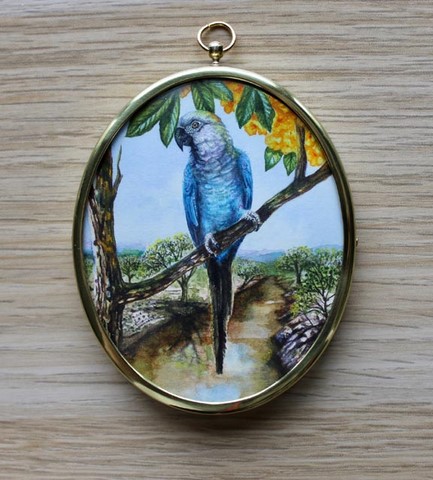 And Then There Were None (Spix's Macaw)

(Reference images used with permision of SAVE Brazil)

Harlequin Macaw in a Palm Tree

For some time Christina had thought about the idea of painting in miniature, but it was as a result of meeting Peter Hayton RMS HS that the idea became a reality. Early in 2020, Christina created her ﬁrst miniature and has not looked back since, ﬁnding this genre a new and totally absorbing challenge. Birds are the main subject of her miniature work. The inspiration for this work is the threat to the Parrots, Macaws and Cockatoos of the world caused by habitat loss, something which the artist ﬁnds deeply troubling.

In July 2019 Christina was elected a member of the Birmingham Watercolour Society. Currently Christina is working in partnership with a fellow artist, with the support of the Woodland Trust, on a project to help raise awareness of the plight of our native British ancient woodlands.